Alot of historic buildings were built without any concern for persons with disabilities (estimated to be about 30% of the global population), and today they are still used by a civilization characterized by a new consideration for the weak users, developed over the last 40 years and underlined by the UN Declaration on the rights of Persons with Disabilities (written in 2006 and adopted in Italy in 2009, Law N. 18).
Therefore, improving the accessibility of the historic buildings, combining the instances of conservation and restoration with a more complete accessibility, should be a crucial purpose of any intervention on existing buildings.
The designers (architects and engineers) must have a conscious approach to the instances of accessibility when they are working on constructions, especially those with high architectural and historical value: improving their accessibility and usability “for all”, allowing to use, to visit and to appreciate.
This aim is also highlighted in the modifications to the Italian “Codice dei Beni Culturali e del Paesaggio” (2008), where the definition of “valorisation” (art. 6) also includes interventions “to ensure the best conditions for the use and enjoyment of the public heritage, even by persons with disabilities, in order to promote the development of culture”.

INTRODUCTION
The purpose can be especially challenging when you consider buildings that were barracks in the past, then assigned to a kind of user who did not admit people with disabilities, but rather that was an expression of strength and athleticism.
Today these buildings are an heritage, partly reused and partly that has to be allocated to new functions; it can be fully valorised if solutions for the removal of architectural barriers and sensorial impairments can be incorporated in accordance with the original architectural, distributive and structural characteristics.
As always it happens in the intervention on the existing, rules do not exist absolute and universally defined, but each building must be analysed and answered in accordance with the needs defined by the different activities to be included and within the existing constraints. However, when systems and aids to overcome the differences in height are inserting to create a more usable and, why not, more enjoyable site, some general principles have to be considered: reversibility, recognition and respect for the existing, on all.
The project for a lifting platform in the Collegio Cairoli, students’ accommodation managed by EDiSU (University of Pavia special agency for students) housing about 100 students from the University of Pavia, was developed following these principles.

The students’ accommodation was established by Joseph II of Austria in 1781 and opened in 1783 as the German Hungarian College for students of theology coming to Pavia from the Austro-Hungarian Kingdom, taking advantage of the unfinished building of the S. Francesco Convent. General Napoleon Bonaparte closed the college in 1796 and used the building as barracks.
The barracks remained until 1947, when prof. Plinio Fraccaro, Rector of the University of Pavia, asked if the military property could be reset as students’ accommodation. The intervention of recovery and restoration were worked by the Provveditore delle Opere Pubbliche della Lombardia1 and a structure with 80 rooms was created in order “that admits students without regional restrictions on the family’s origin” (Transcriptions of the Board of the Opera Universitaria – now EDiSU, May 12, 1948). The college was officially opened on November 6, 1948 under the name Collegio Fratelli Cairoli, and at the time it was the third students’ accommodation in the Pavia (after Borromeo and Ghislieri, the historic institutions that housed students continuously since the XVI Century). Interventions (developed over the last fifty years) for new functions and reorganization of space, led to the current allocation of 100 beds for students and a dozen rooms for visiting professors and conference participants and a large number of halls and public spaces: Aula Magna (capable of accommodating more than 100 people), meeting rooms, reading room, music room and TV room, the gym, the refectory, in the past a canteen now used for events managed both by the college community both by the University or other cultural institutions.
The College also has a library, which now houses more than 45,000 volumes. Moreover, the Collegio Cairoli holds exhibitions of modern art in specifically adapted spaces and rooms for over 30 years; this activity favoured the establishment of a collection of over 400 particular interesting paintings. The Rectors that governed the College (a professor of the Pavia University has the direction of the EDiSU students’ accommodations by statute and tradition) always worked to improve and enrich the College, offering new spaces and new initiatives, sometime open to the entire university community, and in some cases even to the whole town. However great attention was never paid to the problem of connection between the different levels of the building, using the existing large stairs, whose size and location are also suitable to satisfy the safety requirements of the guests. The lack of students with disabilities and the idea that undergraduates are young and dynamic, guided to allocate resources on other critical aspects of the building. Also because there are two other buildings (Giasone del Majno and Volta) with a total of ten automated (domotics) rooms for students with disabilities in two other students’ accommodation managed by EDiSU. In 2013, the Rector of the College, in cooperation with EDiSU Administration, decided to solve the accessibility of the first floor of the building (where the Aula Magna and most of the public and socialization rooms are, including the library) at least, because a greater offer of cultural activities to the city and a message of inclusion were in his intentions (and the current Rector is working in absolute continuousness).
The design has been assigned to engineer Matteo Locatelli, with advice by prof. Alessandro Greco, at that time Delegate of the Rector of the University for Assistance to students with disabilities. 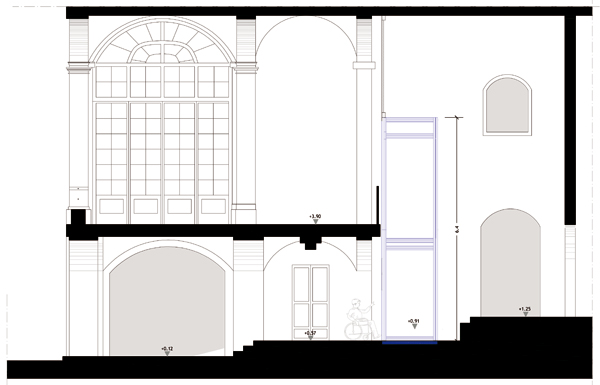 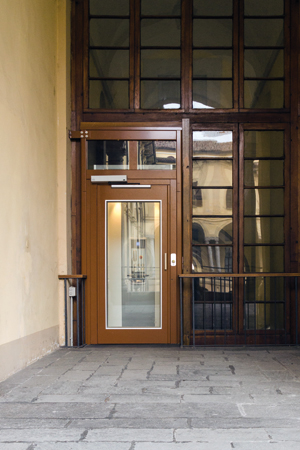 The lift shaft is made of steel and glass, materials that give lightness to the structure and allow the sight of the lighted interior of the lift. This choice of materials has made it possible to satisfy the principle of the recognisability of the intervention. In a such important building as the Collegio Cairoli, the presence of a steel structure and glass is declared to be so obvious as an element made of historical period different from that original. The issue of recognition of operations for the disposal or the elimination of architectural barriers is widely debated in the literature. Some consider that the appropriate solutions to overcome the differences in height is to integrate new elements in the existing building, i.e. to camouflage and blend in with what has been achieved in the previous phases of intervention, thus becoming an integral part of the building complex. Others believe instead that the new intervention must be recognizable in a clear and immediate connection systems vertically, reading them as the attachment of a new layer with respect to the different layers made during the past. In this case the choice of the designers, approved by the Superintendent, has been to make the most recognizable intervention possible.

The project respects the requirements of DM 236/892: lifting platform minimum size (1200 x 800 mm). However the requirements of the legislation were taken as a starting point to define a functional solution to the needs of the College and not as a fixed indication. Given the context and the existing window on the first floor, it was decided to keep the width equal to half of the window (the one removed, equal to 1.3 m) and to exploit the full depth possible (about 1.6 m).These dimensions have not allowed the using of sliding doors and therefore it was decided, in consultation with the Superintendent, simple doors with automatic opening, for ease of use. The choice about the lifting platform was a lift-XL Gulliver of ThyssenKrupp Encasa, one of the most suitable for intervention in historical buildings: among its features these kind of lifts need only 100 mm pit, resulting in modest changes to the existing pavement and construction of a foundation slab extremely limited.The height of the hoist way was defined by reference to the window kept on the first floor: the steel structure takes the geometry of the frame, with cross beams and pillars that continue the design; even colour, chosen in consultation with the Superintendent, is close to that of natural wood of the frame left in place: in this way, the lift is hardly perceived if observed from the opposite side of the courtyardEven the cabin is realized in steel and glass, with push-button panel in relief, with Braille characters and equipped with call system in case of emergency.On the first floor, the threshold has been resolved with a plate of steel, properly corrugated (to signal the transition from outside cabin for people with visual impairments or low vision) laying on the existing paving stone and that related adequately to the entry of the lift.

The lifting platform is working since 2014 with the full satisfaction of students and guests of the College, during cultural events open to the public.
The project has been developed in compliance with the original features of the historic building without altering the cloister, but also with the explanation of the technological and industrial component of twenty-first century. It can be considered as a sustainable project, not only for the low power requirements of the system, but also because we can recognize a social and cultural “sustainable” intervention of accessibility and usability: the cultural references that support the design choices in fact refer to certain principles of the Human Development and Capability Approach, concepts that can also be found in the recent UN document “Transforming our World – the 2030 agenda for Sustainable Development” (September 2015).